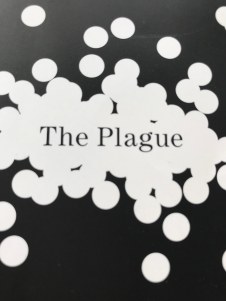 Update: A lot has changed since my most recent podcast. We are now in the midst of a pandemic. Here in Toronto we’re told to stay home. I’m working on some podcast interviews about the crisis, but for now I thought I’d put up some of my own thoughts.

I read Albert Camus’ The Plague for the first time in university. My prof told the class that the book was a metaphor for the rise of fascism in Europe, but her interpretation didn’t ring true to me. The main point of my term paper: “actually, it’s just a story about a plague” earned me a big old C grade. Turns out I was right, though.

Camus was a writer of extraordinary imagination, and it is a sublimely comforting experience to read this book again for what it is: a story about a plague–and how we respond culturally to plagues. Somehow in his brilliance, Camus managed to time-travel through this work, capturing the last few weeks of our lives in our cities in 2020 as he describes the beginning of the plague in the City of Oran in the 1940s.

“Everybody knows that pestilences have a way of recurring in the world; yet somehow we find it hard to believe in ones that crash down on our heads from a blue sky. …A pestilence isn’t a thing made to man’s measure; therefore we tell ourselves that pestilence is a mere bogy of the mind, a bad dream that will pass away. But it doesn’t always pass away and, from one bad dream to another, it is men who pass away. …

“Our townsfolk were not more to blame than the others; they forgot to be modest, that was all, and thought that everything was still possible for them; which presumed the pestilences were impossible. They went on doing business, arranged for journeys and formed views. How should they have given a thought to anything like plague, which rules out any future, cancels journeys, silences the exchange of views. They fancied themselves free, and no one will ever be free so long as there are pestilences.” (1)

Camus is describing a timeless idea: that the kind of freedom that we enjoy in urban spaces exists because we believe in it, because we have dreamed it. The moment that we stop believing in it (as we are doing now, out of necessity), it ceases. And then when it is resurrected it’s joined by a new companion, the soft shadow of our grief.

Remember after 9/11, the saying “If we have [x restriction], we’re just letting the terrorists win”? We were all grappling with how to keep the dream alive so our cities didn’t die. The new tower was a talisman; it kept our dream aloft and our very life as urbanites viable. But it was a changed life. There was a clearly delineated before and after.

In the years after 9/11 I felt a new sense of peril, imagining how terrorism threats and fears would change the things we take for granted in the city. As days and years rolled by, I watched and waited for that freedom to disappear, feeling a punch in my gut every time a new metal detector was installed, a gate erected, a guard posted. At the same time I also felt a sense of gratitude for the parts of the before that did remain. In Toronto, I was still able to jog down the subway steps and hop on Line 1, to take a ride every day and nothing happened. I’d look around and revel in the aliveness of the dream we had made real, even as I worried that it could be fleeting.

When I had a child, I felt an urgency for him to have a before too. I was imagining a new kind of after where freedom would be lost, not by terrorism itself, but by our responses to it–and by climate change, and by various looming collapses and yes, by pandemic. It’s one reason that my family spent the last 2 years roadschooling through Canada and the US. When we landed from that journey 6 weeks (or a thousand years) ago, everything in our lives was beginning to change. Now, fortified inside our apartment we gather our memories like pictures of the gone world (2), stacked onto one another, beautiful and bold, yet shadowed by the soft companion of our grief.

I realize more now that we’ve always had limited control over keeping our lives free in the city, no matter how tall the tower or how big the dream. Our freedom is currently tethered by that thing that just came crashing down, right out of the blue sky (although for anyone looking up, it had been in clear plain sight). And despite the marketing jive of our modern snake oil “Covid cure” hawkers, the current threat to our freedom (the pandemic) is at its core natural—and what saves us is the unnatural, our response and vigilance to control and cure people of it. As Camus writes “What’s natural is the microbe. All the rest – health, integrity, purity,– is a product of the human will.”

The failure of so many people to be vigilant in this time is heartbreaking, as it mostly always has been during times of plague. But how many of us would have predicted that it wasn’t small acts of enemies of the state, but rather the ignorance of the crowd that has brought us to this place without freedom? Even as the pandemic was fully bearing down on our cities, people continued to walk freely on the air of a dream; as Camus put it, “think[ing] that everything was still possible,” so fearful of waking from the dream that they imperiled our freedoms and endangered so many lives.

The state responded rationally, with restrictions to save us all–from the crowd. And here we are, alone in our apartments trying to make peace with what just happened and fearing for the future. Urban life is now restricted in some places to a kitchen and a bedroom, and a view out the window at the vicissitudes of weather. As Camus wrote about Oran: “Thus each of us had to be content to live only for the day, alone under the vast indifference of the sky.”

We now wait through the horrors of this moment for the end–and at the end, for our cities to come back to life. I don’t want to give spoilers for Camus’ story, about how the city of Oran responded during and after the epidemic, but suffice to say we can learn a lot from the story itself, and from the history of pandemics in our world, about the kind of shift in our consciousness we need to be making. We need, frankly, to make a move away from regressive notions of the organic and intuitive and more towards the rational and scientific in order to steel ourselves against the next threat, to protect our cities and the wonder of urban life through practical measures and not just dreams. We will need all our scientists, our artists and advocates to make that a reality. For now, we try to stay safe, living for the day.

Note: For another analysis of The Plague in contemporary context, please see “Albert Camus’ The Plague and our own Great Reset” by Stephen Metcalf, March 23, 2020, Los Angeles Times. It is really, really interesting!!